Now you can benchmark field sales and veterinary service teams of leading companies in the US Animal Health Industry.  Brakke Consulting has developed a census of the sales and professional service organizations of 10 major companies, including both pharma and diagnostics. The report is available for all species or by species group (companion animal & equine, food animal). 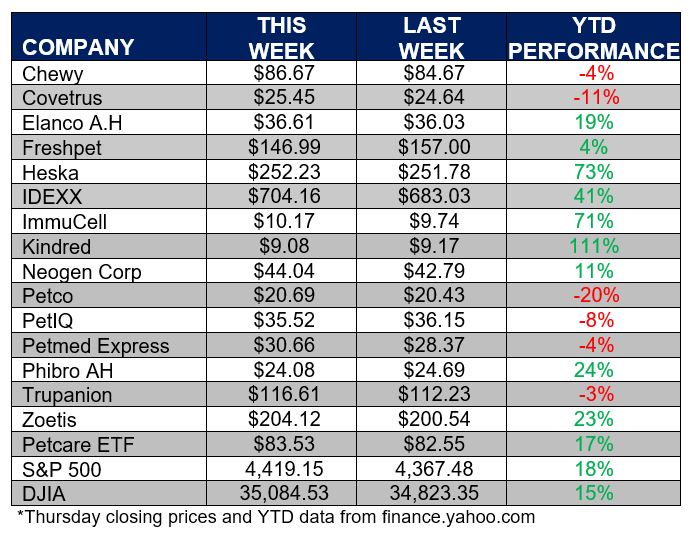 We’ve got a mixed economic report from the few companies reporting this week.  The overall upward trend seems unmistakable when looking at the broad range of results so far in 2021, but there’s a strong message that higher volatility will be with us for some time.

More concerning may be our lead item in the Animal Health News section of the newsletter, which details the discovery of African Swine Fever in the Dominican Republic.  The USDA published a statement confirming their identification of the pathogen on Wednesday, July 28.  This is the first known evidence of ASF in North America.  Existing surveillance activities put in place to prevent the spread of Classical Swine Fever have succeeded in finding this first North American evidence of ASF.  Kudos to the USDA and to the Dominican authorities for their vigilance.  The hard work is ahead, however, to maintain the North American pork market in an ASF-free state.  Any eruption of ASF in the US has a potential to immediately halt an $8.0 billion per year export business as the rest of the world could be expected to immediately stop all US pork imports.

Now, more than ever, the effectiveness of the North American pork industry’s biosecurity protocols will be tested to the limit.  Every single person involved in the animal health business at any level has reason to support the efforts of the pork industry in this existential fight.

This week’s question addresses the availability of workers for your business, since we’re reading a lot recently that says workers are not available in many industries.  Please tell us whether filling open positions in your organization has been easy, difficult, or very hard for you in 2021.  We’ll report the results back to you in next week’s newsletter.

How easy has it been to fill open positions in your organization in 2021?