Brakke Consulting is pleased to announce the appointment of Jeff Santosuosso to its team of consultants to lead executive recruiting efforts at the company.

Mr. Santosuosso received a bachelor’s degree from Stanford University and an MBA from Dartmouth University. In a statement, Mr. Santosuosso says, “I’m pleased to join this team and look forward to working individually with clients. Brakke is uniquely positioned to offer a pinpointed and devoted service complemented by its wide animal health and nutrition network. This is an exciting and valuable combination for the industry.” 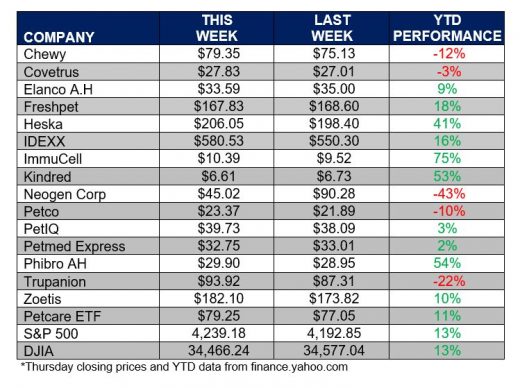 As I write this week’s Viewpoint, today’s business news is focused on the jump in the Consumer Price Index recorded earlier this week; a jump of 5.0% from May of 2020.  While it is difficult to generalize a response due to some highly unusual factors in the data, it is clear that at least in the short term we’re seeing significant price gains.  A comparison from 2020 to 2021 is especially difficult because the 2020 data was depressed by the pandemic shut-downs, and therefore the 2021 gains are large in comparison.

Last week Paul Casady asked you to predict the effect of rising inflation on the animal health market, and those of you who answered Paul showed you are well tuned to the current data!  51% of you predicted significant impact across all segments of our industry, and only 7% predicted no effect whatsoever.  There are still a few of us around who remember the economy of the 70’s and early 80’s, with double digit interest rates and strong inflationary pressure that seemed to be a permanent fixture of our lives.  Inflation in the economy provides an opportunity for those businesses that are managed well to separate themselves from their competitors.

Veterinary medicine is not overly sensitive to the economy, nor is it immune to these challenges.  Likely those companies or practices involved in food animal production have the stronger challenge; over time, however, there will be pricing pressure even on the world of companion animals.  It takes strong discipline to manage spending, use debt wisely to your advantage, improve your cash flow, and otherwise take steps to limit the damage that inflation can do to you.  Since so many in our industry recognize the threat right now, perhaps most will be able to navigate these difficult times and come out healthy when stability returns.

For this week’s question, we ask – are you still following the pandemic restrictions of masking and social distancing?  Your answer may be largely affected by where you live, but it will be interesting to know.