The report includes valuable information on the US market for small animal parasiticides including:
– Product descriptions, prices (veterinarian cost and online pricing), and sales for the leading veterinary flea, tick and heartworm products
– an overview of the veterinary and OTC flea control markets
– discussion of new product launches, including SIMPARICA TRIO, BRAVECTO PLUS, BRAVECTO 1-MONTH, and GENERIC SELAMECTIN PRODUCTS
– 2020 survey of 300+ veterinarians
– 2020 survey of 500 pet owners

The report on the US Flea Control & Heartworm Markets will be available for a purchase price of $7,495 if ordered by FRIDAY, NOVEMBER 13, and $7,995 after that date.

Please contact Dr. Lynn Fondon at 336-396-3916 or lfondon@brakkeconsulting.com to pre-order the report, or for more information visit our website.
www.BrakkeConsulting.com 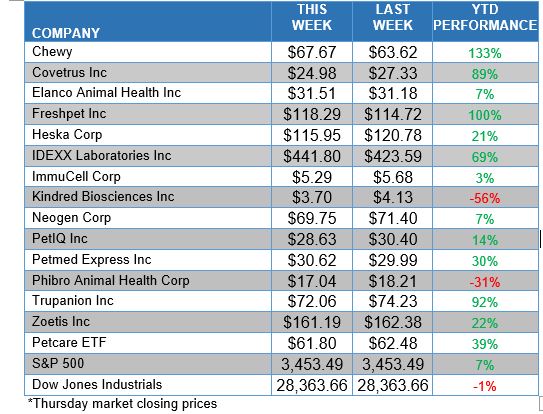 ************************************
BRAKKE CONSULTING VIEWPOINT
While it did not make the news headlines, two pioneers of the US animal health industry died earlier this week; Wes Remington and Dr. Bob Hummel.  Wes, who had been in declining health the last few years. Wes started his career at Anchor Serum as a sales rep and advanced to the position of President until it was sold to Boehringer Ingelheim.  He then started a number of companies, including Med-Tech (which later became Tech America); Agri Laboratories; Phoenix Scientific, one of the first companies to manufacture off-patent animal drugs; Phoenix Pharmaceuticals (known today as Clipper Distributing); and Pete and Mac’s Pet Resorts.  Wes was instrumental in the passing of the federal generic animal drug bill in 1984. In the later years of his career, Wes was a very philanthropic individual for the animal health industry; and he was a key financial supporter of the Kansas City Animal Health Corridor at its founding.  On a more personal note, Wes provided significant financial support and information to the production of “The U.S. Animal Health Industry Book” that Brakke Consulting published for the industry in 2009.  I so enjoyed the interesting interviews and discussions with Wes regarding his memories of the animal health industry.

Robert Hummel DVM began his career in 1961 as a Technical Service Veterinarian with American Cyanamid Company.   In 1967, Bob Co-founded Great Plains Chemical Company (later changed to Lextron), which became one of the largest Animal Health distributors in the U.S with an emphasis towards the food animal protein segment. After a merger with Walco, the company name was changed to Animal Health International and was later sold to Patterson Companies.  Bob retired following the sale at the young age of 78. Bob also had many investments outside of animal health, including a number of small banks throughout the Midwest.  For those who knew Bob and worked with him as a competitor and customer, there were many stories of interactions when things did not go the way he thought they should.  In my interviews with Bob during the production of “The U.S. Animal Health Industry History Book” he had nothing but admiration for the business Willard Wall had built (Walco) and he competed with aggressively.

These two individuals were business entrepreneurs in the true meaning of the word and their actions have made significant impacts on the animal health industry.  I was blessed to be able to know each of them during my career in animal health.

We are now three quarters into 2020.  For some, the year has offered opportunities, while others have struggled with the unique challenges the year has brought.

How do you think your company will look back on 2020; has it been a struggle or an opportunity?