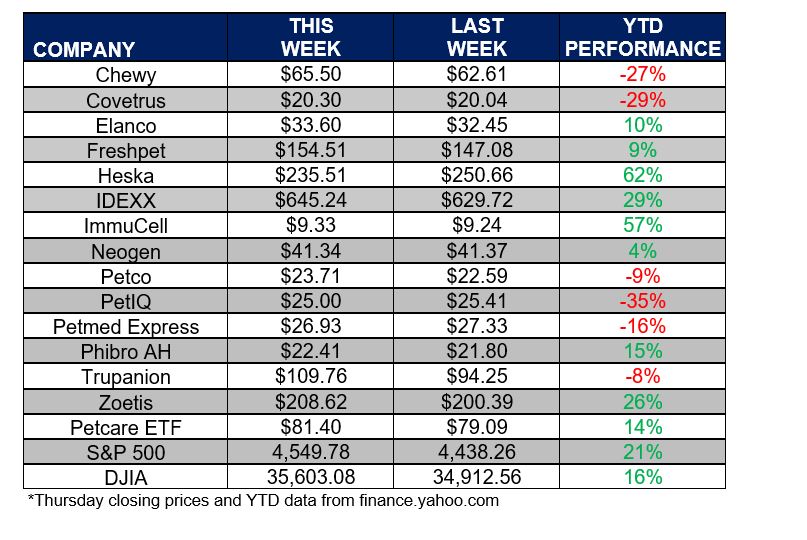 In fact, the animal health industry is being challenged on multiple fronts.  The industry is facing severe staffing shortages and high turnover rates and, based on some recent articles , medicine and clinic supply shortages are beginning to impact patient care and clinic operations.

Clinics are stretched especially given the rebound from the pandemic shutdowns in 2021.  Using the basic principles of supply and demand you can certainly see how economic dynamics can impact the cost of veterinary care for years to come.  Wage pressures are a distinct possibility as clinics compete to attract scarce talent.  Other clinic operating costs are also under pressure due to supply chain interruptions in addition to clinics having to alter purchasing practices to stay ahead of potential stockouts which requires tying up cash in inventory of critical goods.

While we hear the inflationary pressures are transient, manpower shortages combined with supply chain disruptions can impact all aspects of a clinic’s operations.  Is the industry heading toward an inflection point?  Time will tell.

Last week we asked if you would consider giving your pet a CBD supplement. Most of you (65%) said you would consider it if your vet suggested it, and 6% have already given your pet a CBD supplement.  Another 23% would only consider them if the FDA approved them; only 6% said you wouldn’t consider it at all.  We’ve come a long way from the days of “Reefer Madness” (for those of you old enough to remember that propaganda cult classic).

Given the surge in demand for veterinary products and services, have you seen supply chain interruptions in your business and have you seen increases in staffing problems in veterinary clinics?