Are you on top of the trends in the largest market segment in companion animal health?  Brakke Consulting will soon be publishing our 2018 report on the US Flea Control and Heartworm Markets.

The report includes valuable information on the US market for small animal parasiticides including:
– Product descriptions, prices (veterinarian cost and online pricing), and sales for the leading veterinary flea, tick and heartworm products
– an overview of the veterinary and OTC flea control markets
– discussion of new heartworm products, including CORAXIS, MILBEGUARD, and PROHEART 12
– 2019 survey of 300+ veterinarians
– 2019 survey of 500 pet owners

The report on the US Flea Control & Heartworm Markets will be available for a purchase price of $7,250 if ordered by MONDAY, NOVEMBER 25, and $7,750 after that date. 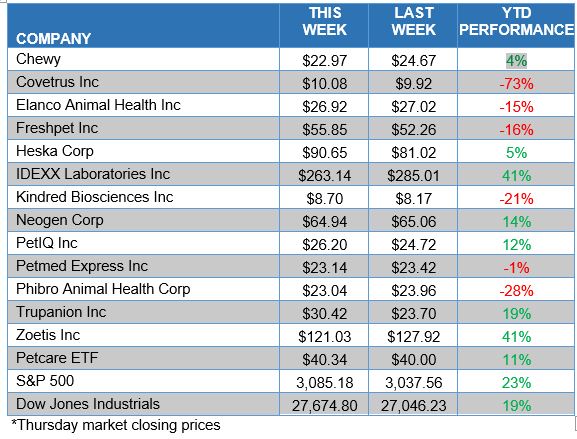 Who Is In Control?

It has been virtually impossible to ignore the biggest animal disease story of 2019. If “pandemic” was not previously part of your vocabulary, it certainly should be now.  African Swine Fever (ASF) has extended its reach globally.  This deadly viral disease of pigs has spread to several Asian countries, but most importantly to China, the largest pork producing and pork consuming country in the world.  The disease is not present in the United States, but it is having an influence here.

During October, Tyson and JBS, two of the largest U.S. pork processors, announced they were forbidding the feeding of the beta-adrenergic agonist, ractopamine, to pigs in their U.S. pork supply chain after February of 2020.  Knowing that Chinese pork production has and will continue to be drastically reduced by ASF, this move could be interpreted as an indication these two meat processers do not want limitations on the amount of pork they have available to ship to China next year. Feeding ractopamine and the import of pork fed ractopamine is prohibited in China.  This regulatory position could be blamed for these two pork processors’ recent announcement.  However, China has had that regulatory position for years.  The change is the catastrophe of ASF and the Chinese consumer demand for imported pork to replace the meat lost because of this disease.  Chinese consumer demand is, in effect, “who is in control”.

The loss of ractopamine sales in the U.S. by two large animal health companies (an estimated 50% reduction in use) has been assessed as having a “small sales impact” (a few tens of millions of dollars) on the two major sellers, and thus the animal health industry as a whole.  However, the larger concern for the future of food animal products cannot be ignored.  How many currently licensed or pipeline food animal products could be vulnerable to similar regulation by foreign consumer demand as US meat exports increase?  We have knowingly operated in a global regulatory environment for some time, but it took a pandemic viral disease like ASF to enable Chinese consumers to dictate the price you pay for pork chops and the formulation of rations fed by U.S. swine producers.