The pandemic that struck the US and the rest of the world in early 2020 is an event that has altered personal lives and business operations unlike any other event.

To help you make prudent decisions during this disruptive period, Brakke Consulting is launching a new 3-wave tracking study, COVID 19: Impact on Pet Care.  The study is based on an online pulse survey of a nationally representative sample of 1,000 pet owners conducted every few weeks starting in May 2020.

The study will deliver 3 reports, roughly 4 – 6 weeks apart, beginning in late May.  The cost of the study is $17,500.  For more information, contact John Volk at john@volkonline.com . 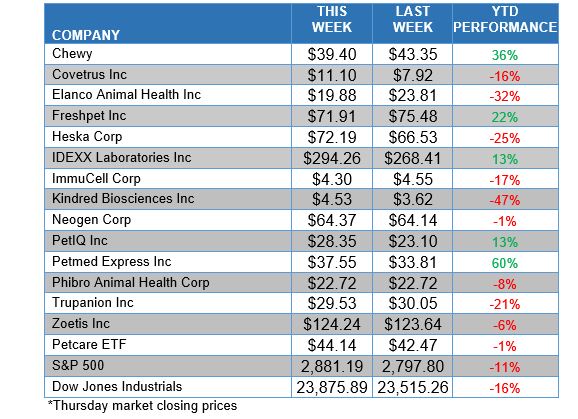 We are knee deep in earnings season for 1Q20.  Some of the largest companies have  reported 1Q results:   revenue growth was  +7% for Zoetis, +21% for Merck Animal Health, +17% for Bayer, +9% for IDEXX and -9% for Elanco.  The results for the most part showed were for both companion animal and livestock and in the case of Merck and Bayer, were driven by continued market growth combined with inventory builds given the mounting challenges due to COVID-19.  Elanco’s decline was attributed to a decision to reduce companion animal inventory levels at the distributors and to consolidate their distributor partners from eight to four.

The 2Q and 3Q results are likely to be very different.  Vet clinic visit data presented in the IDEXX earnings release showed clinic visits increased +4% YTD through mid-March and then posted strong declines of -25% in late March before moderating to -15% declines by the end of April.  In addition, disruption in the cattle and swine processing combined with weakening profitability are driving uncertainty.

We’ve noted that online retailers seem to be the beneficiaries of the stay-at-home orders as evidenced by Chewy’s stock price growth of more than 40% YTD.   Have we seen the new normal in terms of customer purchasing behaviors?

Through all of this, let’s not forget America’s other unsung heroes, the farmers, ranchers, food producers and food suppliers who have also been hit hard by COVID-19 both medically and financially.  To these heroes I say…THANK YOU for all of your efforts to help feed the U.S. and the world!!!

Last week we asked you, “When you’re safely allowed back in your office and you are asked by your boss what you did to improve yourself during the lock down?”.  A whopping 41% said “they will get back to us later as they are headed onto a Zoom call”, 21% said they had “stopped watching the news on TV”, 15% said that you had “put on weight in case of a food shortage”, 13% said you had “learned that school teachers are not nearly paid enough and 4% became an epidemiologist.  Finally, I am in the camp of 6% of the respondents, learning to cut my own hair.  I have been watching You Tube Videos as my new hair clippers just arrived.  Wish me luck!!

This week we would like to get a bit more serious.  We are all hearing about interruptions in our food supply chain due to plant closures resulting from COVID-19.

How many of you have experienced animal protein shortages in your local grocery stores?