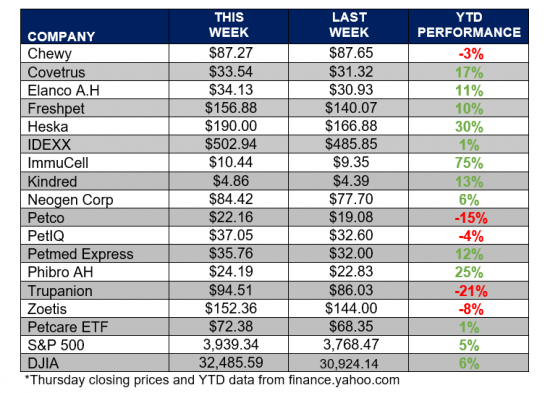 ************************************
BRAKKE CONSULTING VIEWPOINT
The massive American Rescue Plan President Biden signed into law yesterday should be bullish for animal health.  40% of US households have been negatively impacted economically by the COVID-19 pandemic.  This cash infusion means that more households will have more disposable income to spend on pets and their veterinary care.

Veterinarians have already benefitted from those who remained employed during the pandemic.  Those households had extra disposable income that they weren’t spending on vacations, restaurants, movies and other forms of entertainment.  Overall, the majority of veterinary practices prospered in 2020.

And let’s not forget the food animal sector.  The greater the household income, the higher percentage of the food dollar that goes to beef, pork and other proteins, for both in-home and out-of-home dining.  The Rescue Plan, along with declining cases of COVID, is good news for the industry.

This week
This week the USA should surpass 100 million COVID vaccines administered.  We’d like to know:  Have you had your jab yet?  We’ll report by age group in next week’s newsletter.

Have you received at least one dose of a COVID-19 vaccine?