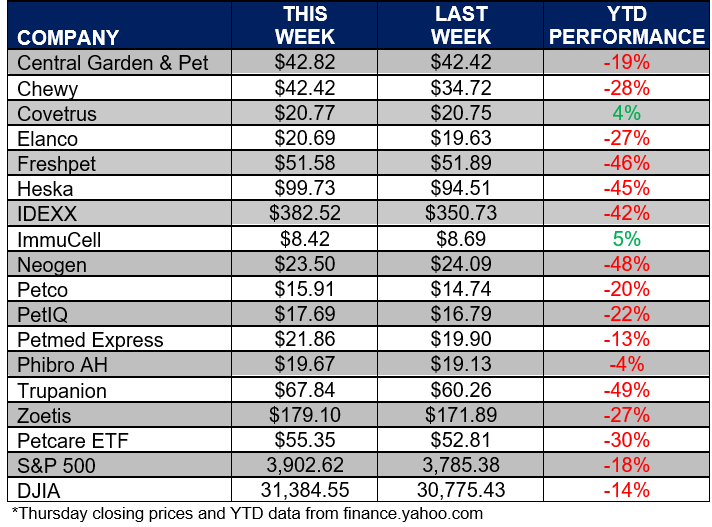 The financial markets have taken a beating thus far in 2022.  The Dow Jones Industrial Average has declined -14%, while the S&P 500 Index is down -18% YTD.  Perhaps indicative of the animal health segment, PAWZ, the Petcare ETF that tracks the animal health industry, is down -30% YTD.  Ouch.

The Fed recently raised its benchmark interest rate by 75 basis points with more hikes likely to come, so the days of “free money” or inexpensive borrowing are over.  This can potentially have long term impacts on innovation in the animal health industry.  The industry depends not only on the big companies (Zoetis, Elanco, Merck and BI) who have well-funded R&D organizations, but also on hundreds, if not thousands of small start-up companies for innovation, where access to cash is critical.

Investment capital and borrowing is needed by start-ups and early-stage companies to fund operations and growth.  It remains to be seen how venture capital along with increased borrowing rates will impact the funding of innovation.  Moreover,  increased interest payments combined with reduced margins due to inflation may impact nascent companies in tenuous cash flow situations.

Innovation is critical to address the many unmet animal health needs both in terms of products and technologies.  If your company needs help making decisions about innovation and funding, we can help.

Last week we asked whether you have taken your pets on vacation with you – 59% of you said you had. Sounds like our pets are living the good life!

This week
In the current economic environment with rising interest rates combined with what appears to be slowing foot traffic in vet clinics, have you seen an impact on your organization’s cash flow?