you can learn about the latest innovations and products while exploring our exhibit hall, network with other veterinary professionals, and choose from more than 400+ hours of quality CE/RACE approved sessions. 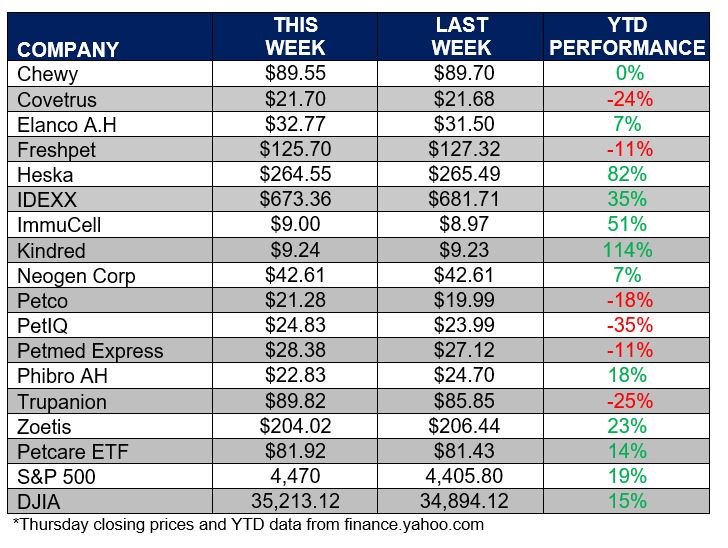 This week was the second edition of the digital version of KCAHC’s Animal Health Summit.  There was a wide variety of information made available both in livestream and recorded webinar formats, as well as opportunities for one-on-one virtual meetings. Congratulations to the KCAHC on successfully adapting to a new way of presenting valuable content for our industry.

One of the trends that was reinforced in a presentation at the Summit is that much of the industry’s innovation is now coming from startups – over 500 in the vet industry according to data compiled by Fabian Kausche and Stonehaven Consulting.  The breadth of the new concepts and technologies being developed to improve animal health is truly amazing.

Funding all this innovation is an unprecedented wave of private equity/venture capital entering the segment.  Pitchbook recently reported that pet companies have raised over $1.1 billion dollars thus far in over 125 animal health deals worldwide in 2021 – wow!  It’s gratifying to see the investment community embracing animal health.

Last week we asked what your employer’s current position is on working at home versus in the office. 28% of you said the company had planned to have people return by this fall, but have now postponed the date; another 24% said your firm has a hybrid remote and in-person policy. Only 14% said that all employees who typically work in the office are back to work now.  Sounds like we have a ways to go before we are back to a pre-pandemic work environment, if ever.

Over the summer, industry meetings started to offer in-person options again.  WVC is in-person in a week’s time, and others are lining up later in the fall.  Will you be attending an in-person industry conference before the end of the year?