Did you know that Brakke Consulting can provide your company with product development and regulatory affairs assistance in the animal health vaccine, diagnostics, and drug segments for both food and companion animals?

Brakke Consulting has the experience, insight, ability and contacts to provide clients with high quality, product-specific consulting services in the areas of technology assessment, product development, manufacturing, and regulatory affairs. Let Brakke Consulting assist you in moving your project from proof-of-concept right on through to commercialization.

To learn more about how we can help, please contact info@brakkeconsulting.com  or Mike McGinley directly at mjmcginley813@gmail.com  for a confidential consultation. 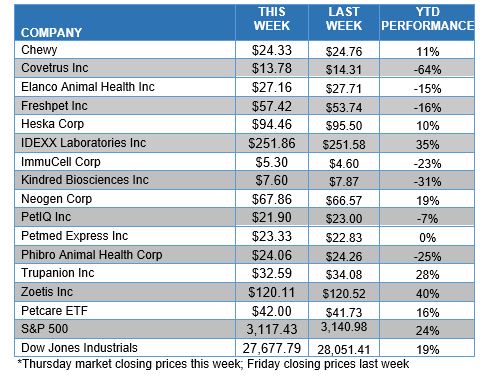 As we approach the end of 2019, I have spent a lot of time thinking, reading and talking with others about the fast-changing veterinary diagnostics space.  For quite a few years now we have become accustomed to the diagnostics space growing at rate higher than the animal health industry as a whole (CAGR of 8-10% for diagnostics versus 4-5% for animal health).  The natural question is: Can this diagnostic growth rate continue?  Well, not surprisingly, there is no shortage of “crystal ball” speculation out there on the subject.  Fortunately, the general consensus is that the answer is YES, with a high probability of growth rates in excess of what we’ve come to expect.

There are a few commonly cited factors and drivers that support this belief and three of these seem to dominate the landscape.  The first of these is that the use of preventative diagnostics in the veterinary practice continues to rise, with higher than average corporate hospital use rates leading the way.  With vet clinic consolidation expected to continue at a pace similar to what has been seen in the recent past, this higher use rate trend should continue and likely expand. Secondly, the major players in this space are increasingly focused on international markets that haven’t yet widely adopted preventative diagnostics. These markets represent a very large portion of the global addressable veterinary diagnostics market estimated to be $33B (recent IDEXX estimate), of which only about 11% is currently being served.  Lastly, innovation in the areas of fecal/urine testing, early cancer detection, and genetic testing are predicted to both expand the available menu of preventative diagnostics, as well as replace some labor intensive and inaccurate existing methods.

One potential area of growth where opinions vary widely, is growth from synergies between products (vaccines, drugs, etc.) and diagnostics.  Developing a clear strategy that creates revenue synergies across these categories would seem to be both a growth driver and a game changer in veterinary diagnostics and animal health in general.  There are certainly challenges to be overcome, but there is one obvious industry leader in Zoetis that continues to strategically build and acquire the assets necessary to move in that direction.  Will they develop such a strategy, and will others try to follow?

All in all, the veterinary diagnostics space looks to be well positioned for growth rates that exceed the overall animal health industry growth well into the future.  If this trend does hold true all stakeholders; veterinarians and the patients they care for, investors, manufacturers, innovators, and underserved markets across the globe, will benefit from a more reliable, accessible, and profitable practice of preventive veterinary medicine.

In closing, I want to wish you all the best for a successful close to 2019, as well as Happy Holidays and a Happy New Year.  I hope to see many of you at VMX and WVC in early 2020.  Until then, take care and be well.