The report includes valuable information on the US market for small animal parasiticides including:
– Product descriptions, prices (veterinarian cost and online pricing), and sales for the leading veterinary flea, tick and heartworm products
– an overview of the veterinary and OTC flea control markets
– discussion of new product launches, including SIMPARICA TRIO, BRAVECTO PLUS, BRAVECTO 1-MONTH, and GENERIC SELAMECTIN PRODUCTS
– 2020 survey of 300+ veterinarians
– 2020 survey of 500 pet owners

The report on the US Flea Control & Heartworm Markets will be available for a purchase price of $7,495 if ordered by FRIDAY, NOVEMBER 13, and $7,995 after that date. 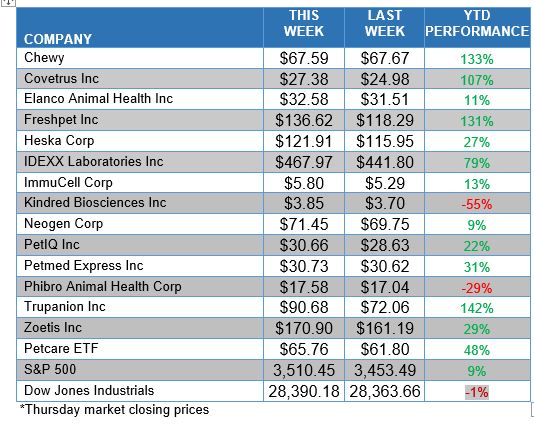 ************************************
BRAKKE CONSULTING VIEWPOINT
I don’t know if Trupanion insured pet ducks in the past, but it might now that Aflac has taken a 9% stake in the company and will start selling Trupanion pet health insurance at work sites.  Aflac is the largest supplier of supplemental insurance.  It also has a large presence in Japan.  And of course, Aflac television commercials have featured the iconic and comedic duck for the last 20 years.

We probably get more inquiries about pet insurance than just about any other topic.  Though still relatively small, it’s one of the fastest growing pet products in the US.  That growth no doubt will be further accelerated by the involvement of well-known companies like Aflac – and of course Nationwide, which is the largest pet health insurer in the US.

This week
Let’s probe the topic of company performance a little further.  This week our question is:  How will your company do against plan in 2020?