Are you on top of the trends in the largest market segment in companion animal health?  Brakke Consulting will soon be publishing our 2019 report on the US Flea Control and Heartworm Markets.

The report includes valuable information on the US market for small animal parasiticides including:
– Product descriptions, prices (veterinarian cost and online pricing), and sales for the leading veterinary flea, tick and heartworm products
– an overview of the veterinary and OTC flea control markets
– discussion of new heartworm products, including CORAXIS, MILBEGUARD, PROHEART 12, and BRAVECTO PLUS
– 2019 survey of 390 veterinarians
– 2019 survey of 500 pet owners

The report on the US Flea Control & Heartworm Markets will be available for a purchase price of $7,250 if ordered by MONDAY, NOVEMBER 25, and $7,750 after that date. 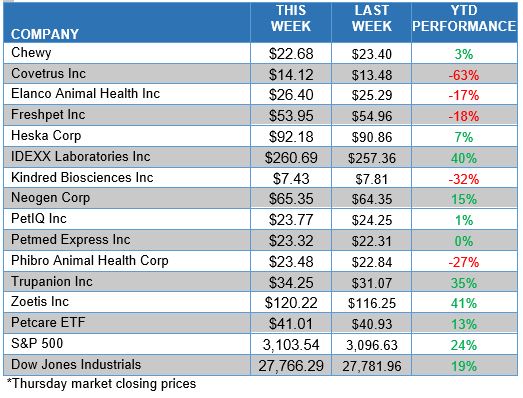 There is a lot to reflect on in this week’s News and Notes, especially on the topics of antibiotic use in animals, new drug approvals and new partnerships.  But in yesterday’s Wall Street Journal, there was an editorial about topic that I thought was timely and worth reflecting on.

The Editorial Board’s opinion piece was titled, “What’s Your Degree Worth?” that points out a newly revamped Department of Education website that helps students receive a fuller picture of the earnings and debt associated with a specific degree and college.  As a former student of Texas A&M and animal science major, I wanted to see what the salary range was for that major today is and also what the DOE says the outlook for veterinarians is today.

Animal science graduates at TAMU-College Station have an annual salary one year after graduation between $20,000 and $82,000 and the average annual cost is $20,000.  The graduation rate is 80%, 14 points lower than the highest, which is Cornell.  Alas, the site doesn’t provide information on advanced degrees, so I wasn’t able to see what the data is for DVM/VMDs and compare it to the rich data the AVMA has.  But the salary range for a Veterinary Biomedical and Clinical Sciences graduate from my other alma mater, the University of Illinois is $17,000 to $92,000.  The graduation rate is 86% and the average annual cost is $18,000.  Not bad at all.

Why bring this up?  Many of you reading this are parents (or grandparents) and given the upcoming holiday time, many of you will have time to talk to your kids (and grandkids) about their career, what major to choose and what college to attend, how much it costs and graduation rates.  Don’t miss the opportunity.  The other reason to bring this up is that at least two of the science-based degrees common in our animal health industry have the potential to be quite well-paying soon after graduation.  So, if you have the chance, bring it up.