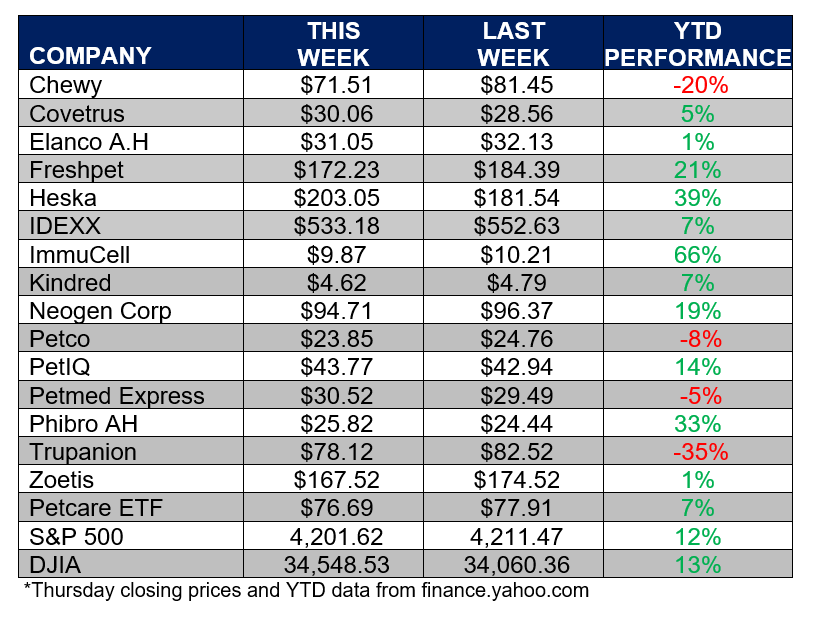 ***********************************
BRAKKE CONSULTING VIEWPOINT
Today’s newsletter has a flurry of earnings reports that range from good to spectacular.  Granted, the year-ago comps were impacted by the initial shutdown due to COVID-19.  Still, many companies printed excellent results in both the companion animal and food animal sectors.

More good news came in the form of the annual State-of-the-Industry report from the North American Pet Health Insurance Association (NAPHIA).  Number of pets insured and gross written premium were both up more than 20%.  Research studies conducted by both NAPHIA and the American Veterinary Medical Association show that pet owners spend more for veterinary care on insured pets .  So that’s bullish for all players.

With these reports, and the rapid recovery of the US economy, 2021 has the potential to be a banner year for the industry.

Last week we asked, “What drivers in the external environment do you think are the most impactful on companies in the animal health and nutrition industry?”  50% of you answered:  “Alterations in consumer and client expectations.”  Second-most votes – about 21% – said “New developments in technology.”

Now it’s time to dust off your crystal ball.  1Q21 was obviously a great start to the year for many companies.  What do you expect global growth in animal health to be in 2021?  (Hint: Growth typically runs about 4.5%-5.0%.)

I’m a big believer in the law of large numbers.  Let’s all participate in this week’s quiz.  Please share your view.